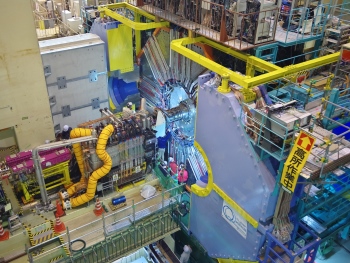 High energy physics is a research field to study the origin of matter, fundamental interaction and the space-time structure by investigating reactions of high energy particles made in an accelerator.
In Japan, many researchers from all over the world carry out the forefront research, such as Belle II experiment with SuperKEKB accelerator which is the world's highest luminosity electron and position collider (left picture), T2K neutrino oscillation experiment with J-PARC high intensity proton accelerator producing neutrino beam which is directed toward Super-Kamiokande detector. Researchers are also vigorously working on international experiments using accelerators all over the world, and development of next-generation accelerator technologies.
Japan Association of High Energy Physicists (JAHEP) was established as a forum where all the high energy physics researchers in Japan exchange their opinions and express their ideas.

2019.11.06
HEPC Chair's letter to express general opinions of the HEP community in Japan in response to an inquiry from European Strategy Group Secretariat (CERN/ESG/05b, private). [PDF]

2017.09.06
Final report of the committee on Future Projects in High Energy Physics.[PDF]

2017.07.26
Scientific Significance of ILC and Proposal of its Early Realization in light of the Outcomes of LHC Run 2.[PDF]